On January 22nd the BBC News website published an article titled “Switzerland ‘made secret deal with PLO’ after bomb attacks” in which Imogen Foulkes gave a reasonable account of the story and its significance. 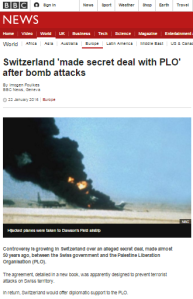 “Controversy is growing in Switzerland over an alleged secret deal, made almost 50 years ago, between the Swiss government and the Palestine Liberation Organisation (PLO).

The agreement, detailed in a new book, was apparently designed to prevent terrorist attacks on Swiss territory.

In return, Switzerland would offer diplomatic support to the PLO. […]

Almost half a century later, with many countries experiencing terror attacks, it seems outrageous to some Swiss that their own government might have done deals with groups classed as terrorists.

What is more, the relatives of those who died in the bombing of the Swissair flight may be justified in feeling angry that no one has ever been brought to…

Positive News served with cream, sugar, and a spoonful of Hope

Hasidism for the Rest of Us

Now broadcasting from the Holy Land

A site for genealogists and history geeks