In 1975, after repeated attempts to kick Israel out of the U.N., the General Assembly succumbed to the pressure exerted by the Arab countries and determined that Zionism is racism. The decision was the cornerstone of the institutionalized factory of discrimination against Israel at the United Nations. The U.N. waited 16 long years before retracting its “Zionism is racism” decision. The protocols have been updated, but even with no official reminder, the stain remains on the walls of the general assembly hall and the stench is still in the U.N.’s corridors today.

Of the 193 states that belong to the U.N., only 87 are democracies — less than half. The countries that are taking advantage of the democratic process at the…

The Many Iranian Obstacles in the Way of a Strong Nuclear Deal, The Atlantic, Jeffrey Goldberg, November 23, 2014

(Assuming an eventual bad nuke deal, will the U.S. Congress be able to kill it? In a reasonably bipartisan fashion?– DM)

‘I just want this much enriched uranium’ (Reuters)

It will be near-impossible, especially after the immigration debate, to sell the Republican-controlled Congress on whatever Iran deal Obama negotiates. But the Democrats won’t be an easy sell, either.

The other day I fell into conversation with a very smart congressman named Ted Deutch, a Democrat from Florida, about his minimum requirements for an Iran nuclear deal. Deutch, who sits on the House Foreign Affairs Committee, is—like a large number of Democrats—fairly-to-very dubious about the possibility of a true breakthrough with Iran, and fairly-to-very worried about the consequences of a bad deal. (It seems likely, at this moment at least…

Anyone keeping up with the news, or anyone just reading this blog, will know that this subject is unfortunately a recurring one. It is a vicious circle, where the Palestinians, specifically the Palestinian leadership including Palestinian “President-for-life” Mahmoud Abbas, deliberately impute not only the worst possible motives to Israeli actions, but invent the worst possible motives, for the sole purpose of inflaming passions and inciting yet more violence.

This habit has by now become ingrained, so that even a simple accident or a suicide is immediately interpreted as murder, a lynching, and more often than not blamed on everyone’s favourite bogeyman, “the settlers”.

We saw this last week when a mosque caught fire in the West Bank. Despite the fact that it was probably an electrical fire, and no other source for the fire has yet been found, settlers were blamed for arson.

Yesterday, a Palestinian resident of Jerusalem… 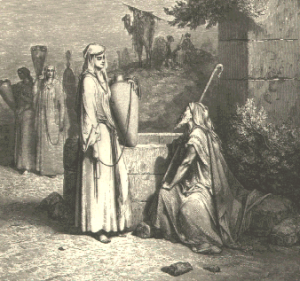 Two of my favorite characters in the Book of Genesis are Avraham and his daughter-in-law Rivka. Avraham is one of my heroes, and I want to marry someone like Rivka.

Both Avraham and Rivka are famous for their hachnasat orchim, which means welcoming guests. Avraham is the first Jew, he thinks for himself, questions authority, and even argues with God. He is willing to be himself and do what he believes even if the whole world thinks he is crazy, which is why he is known as an Ivri, which means “he who stands on the other side.” According to the Kabbalah, Avraham represents the character trait of chesed, which translates as “loving kindness.” According to the midrash, Avraham had an entrance on every side of his tent so he could welcome guests from the four directions.

There is a story that after the third day of…

An Israeli military outpost as seen from South Lebanon, where a Hezbollah flag flutters

Perceived dangers to our lives and ways of life can be a function of trends – just like everything else in our existence. The latest headline-grabbing focus of fear is Islamic State expansionism. This isn’t a bugbear of negligible proportions.  IS bloodlust and fanatic belligerence are nothing to scoff at.

That said, however, IS isn’t the only threat to the world’s democracies – Israel among them. Neither is it the greatest threat – certainly not to Israel.

Regardless of the repugnance aroused by IS’s sensationalist and lurid beheadings, worse villains abound in our region. Iran with its nuclear ambitions is foremost one, even though the White House is poised to appease Tehran’s ayatollahs without disarming them.

Who is the Real Chickenshit? Gatestone Institute, Bassam Tawil, November 4, 2014

Judging by their actions, most Arab leaders do not want to create yet another terrorist Islamist state, dedicated to the Muslim Brotherhood’s ideology and to toppling their regimes. We do want a Palestinian state, but please, only one that will provide responsible governance.

According to the “Arab street,” it is the Americans and Europeans who are cowards, afraid to take significant steps against Iran, and terrified of the Islamic ghettoes in their cities, which have been exporting terrorists to fight for the Islamic State, and providing housing to the seasoned fighters who return.

To Arabs, the ultimate irony is that America is paying Qatar to have its…

Turning Israel into your Bayit

A world of freedom There are no constraints

Embracing the Butterfly Effect of Love